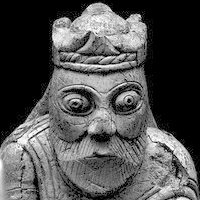 But, like the concept of bureaucracy, chess had a presence in China long before medal counts. And Chinese chess truly feels like a sport, as does chess-watching. It even has set positions. There’s always at least one observer who gives advice before a move is made. Another onlooker waits until the move is finished before he offers his comments. This is the pairs event for spectators—the coach and the critic—and you would expect it to drive players to violence. But all aggression is directed at the board. Near the Lama Temple, Old Zhang and Little Zhang slammed the wooden pieces as hard as they could with every move.
Thwack!
“I’m giving your horse something to eat!”
Thwack!
“I need a gate! I need a gate!”
“Right, right! That’s the right move!”
Thwack!
“I’m giving it to you cheap!”